When life gives you lemons… weave yourself some lemonade. To keep us all going during the global coronavirus pandemic – whether we’re self-isolating, quarantined or just keeping a safe distance – I decided to share a few ways to make the most of simple drafts. There’s no master plan, but the theme is loosely ‘what can I do with the odd bits of yarn I have to hand?’

Two twills at once

I recently posted about double weave using twills, but there is another way to weave two twills at once. A double-faced twill is a twill woven with two wefts on a single warp layer. One weft is woven in a 1/3 twill and the other in a 3/1 twill. The shafts are carefully chosen so that the two weft picks can slide right over each other. Take a look at the top two picks here:

The topmost pick is woven by raising just shaft 1. For the second pick shaft 1 remains raised and is joined by the shafts either side of it in the twill progression: shaft 2 and shaft 4. You can see how the orange thread at the top of the drawdown could just slide down and completely cover the purple thread. In practice, that is exactly what happens. One side of the cloth will end up showing the orange weft and the other side will end up showing the purple weft. The cloth has two distinct faces, hence double-faced.

You may be familiar with this technique from rug weaving. As the two wefts create an extra dense fabric, it is often used in that context. But it’s by no means limited to rugs. As well as being useful for other applications of sturdy cloth, such as bags and cushion covers, it is also excellent as a way of decorating the ends of a scarf. I’m sharing this as a Lemonade Weave because I made a whole collection in this way, specifically to use up scraps of hand-dyed yarn which I didn’t want to waste!

You aren’t limited to a straight draw. Any threading suitable for a 1/3 or 3/1 twill is suitable for both at once. You can mix it up with the treadling too, but make sure you always keep the eight picks shown above in their corresponding pairs. In order to maintain the twill progression on both sides of the cloth, Lift 1 should always be followed by lift 2, lift 3 by lift 4 and so on. To create a point, therefore, you would need to weave lifts 1-2, 3-4, 5-6, 7-8, 5-6, 3-4, 1-2.

One of the pleasures of this structure is that you can have two completely different patterns of changing colour, such as stripes on one side, plain on the other, or wide stripes vs narrow stripes. I haven’t taken a separate screenshot of the reverse of this drawdown, but I think you can tell from the light and dark blue peeking through that the two layers are patterned differently.

You’ll notice that to weave both types of twill you need eight distinct lifts. This is no problem on a table loom, but if you are weaving on a floor loom with treadles, then your best option is a universal tie-up. This will allow you to mix and match treadles to make all the combinations you need.

You can also start and finish with a single layer of twill woven 1/3, 2/2 or 3/1 if you want to use your double-faced stripes as an accent treatment. (Personal note: this was exactly how I used it in one of the very earliest weaving projects I did, as a scarf for my father-in-law.)

Blocks, blocks, glorious blocks! I am always a bit over-excited by the possibilities of blocks. They have a role to play here too. The draft shown below illustrates several different things.

Let’s start in the middle of the liftplan and work outwards. I have written two different sequences of alternating lifts. The centre section, alternating purple and blue wefts, has the two blocks progressing in one configuration, while the sections either side of it (blue and green above, purple and green below) progress in the opposite configuration. These are the same basic set of lifts but reordered: we will see this more clearly in the tie-up version below.

Outside this central area there are two sections alternating white and a colour. The warp here is white, so by including white as one of the weft colours, we can create the illusion that there is just one weft appearing selectively in some blocks but not others. This is a neat trick! It also allows us to head smoothly into the outermost sections which are just ordinary 1/3 twill with the weft matching the warp. This illustrates a way of using the double-faced twill as an accent on a longer piece of weaving.

On a floor loom, the liftplan above would require 12 treadles. Great if you’ve got them!

If you are limited to 8 treadles, then you can still use this structure, but you’ll need to maintain the 1/3 and 3/1 lift pattern in your blocks even when you have a single weft. Of course, you might choose to do this anyway, because twill blocks are fantastic. Did I say that already?

There are two different options (as usual) and I have shown one above the pattern section and the other below.

One final thing which you might notice about the drawdown above. The angle of the twill diagonal appears to change very sharply when we move from the single-weft section to the double-weft section. This can look a bit alarming on screen and on paper, but it won’t happen in the cloth. Remember that each pair of picks will slip alongside each other and occupy the same horizontal space when you weave them.

When I was using up my hand-dyed scraps, I was weaving on 16 shafts. I could have played around with all those potential blocks, but I had triangles on my mind and triangles it had to be. It would be feasible to do something similar on 8, but the triangles would be quite a bit smaller. If you want to experiment, be my guest!

A point threading over 16 shafts and the following liftplan create a series of interlocking zig-zags on one side of the cloth and triangles on the other.

You can pull off the same trick we used on 8 shafts, and make the first ‘zig’ appear to be floating on the background, by making one of your weft colours match the warp. In the draft below I have replaced the red weft with white to illustrate this. And, as before, we can segue in and out of a single layer of twill. In this instance I maintained the zig-zag pattern in the single cloth with a liftplan that combines 1/3 and 3/1 twill. (Again, the apparent change of angle is only on screen, not in the cloth.)

To weave this on a mechanical dobby, as I did, I recommend creating two separate lag chains and switching them over as required.

Just one tip: beat firmly. Make sure those two wefts are overlapping.

I hope that gives you something enjoyable to play around with. Happy Weaving! 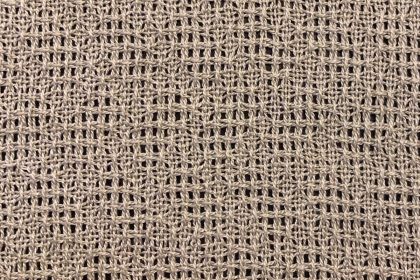 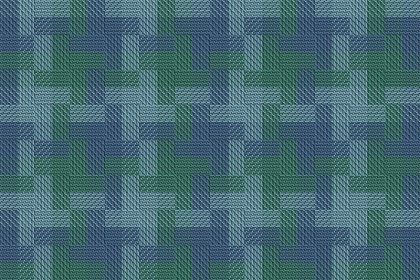 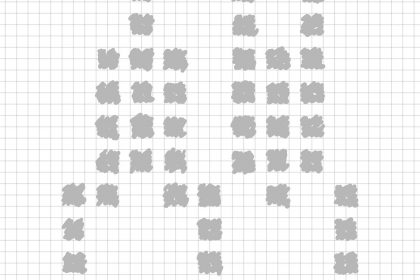 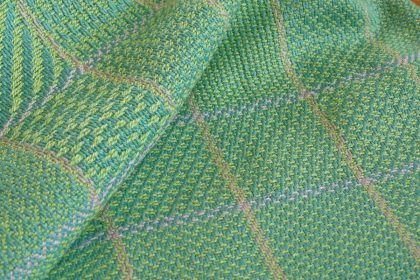 Get Warp Space in your inbox!

Essentials that every weaver needs to know

Make the most of the power of eight