Every weave structure we create on a shaft loom is a product of two elements: the sequence in which we thread the warp ends and the sequence of lifts we then use to manipulate those warp ends. We have already considered some of the options for threading 8-shaft twills, and we have looked at the different ways in which we can tie up an 8-shaft loom to create different twill lifts. Now it is time to put those lift combinations into action by looking at the ways in which varying the treadling affects the design of our fabric.

For the purposes of this post, let’s imagine I have set up my loom with a straightforward point threading and tied it up for a 3/1/2/2 twill progression:

Weave as drawn in

If I were to ‘weave as drawn in’ then I would mimic the shape of the threading in my treadling. This would give me the classic diamond shapes we associate with a point twill. 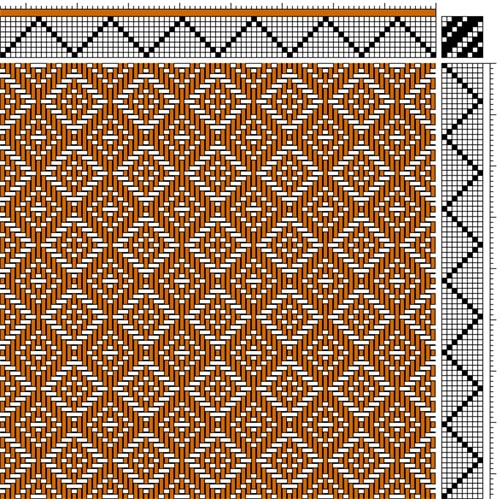 Another phrase which means the same thing is ‘tromp as writ’ and you will often see one or other expression used in weaving books and monographs.

The slight asymmetry we have in this tie-up means that we are seeing a little more warp than weft on the face of this cloth, while the back of the cloth will have a little more weft than warp.

A simple alternative to a point treadling would be a straight treadling.

Comparing these two treadling sequences, we can see that the first eight lifts are exactly the same. In fact, the straight treadling simply repeats the first eight picks of the point treadling continuously. This means we get the first half of a row of diamonds over and over again, making a chevron or zig-zag pattern.

We can immediately start to explore variations, then, by stretching and combining elements of the straight and point treadlings (much as we did with our threadings). The following draft starts with a point, which is then extended on one side to create a little straight section. The result is a double row of diamonds followed by a row of chevrons. 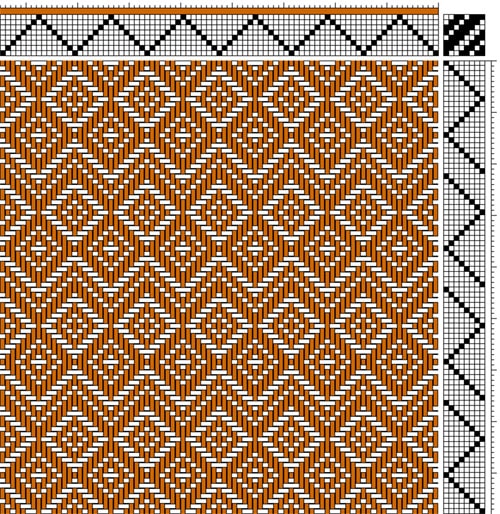 Another way to vary these elements is to advance them in small steps. I described the advancing point in detail in my previous post, and I am sure it won’t surprise you to learn that we can give the treadling exactly the same treatment as the threading. 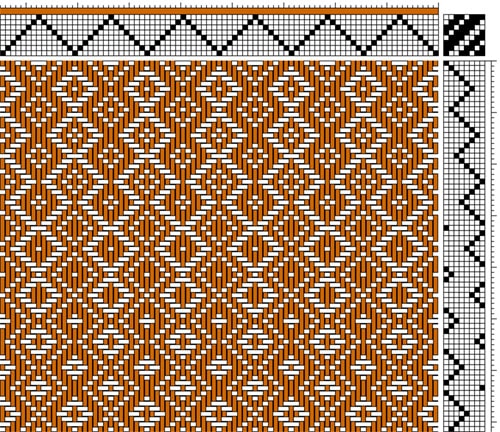 You may notice that the diamonds are now a little smaller, which happens because the points we are treadling are not ‘full size’, i.e. we aren’t progressing all the way from treadle 1 to 8 and back again. In this example I have treadled from 1 to 6 and back to 3, then from 2 to 7 and back to 4, and so on. As the apex of the point moves across the twill progression, we see a lovely movement in the diamonds from warp-emphasis to weft-emphasis in one direction interleaved with the opposite shift in the other direction.

Applying a similar treatment to the straight treadling also produces a gradual shift, this time in our chevrons. You may have to lean back from your screen and half-close your eyes to see the full effect! 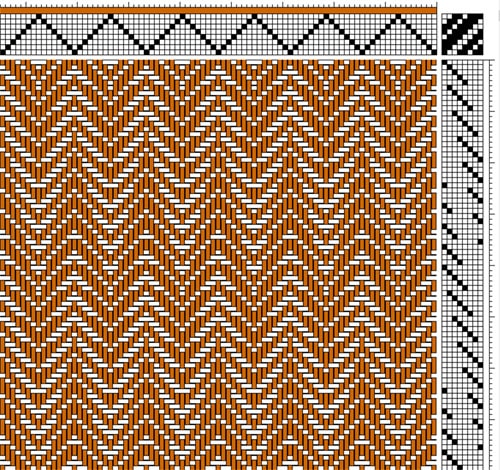 Can you see how the effect is visible on two different scales? First of all, each individual pattern line is part warp, part weft in a different mix. Then stacking up these pattern lines we get a larger scale effect of a warp-faced zig-zag alternating with a weft-faced zig-zag. In the drawdown above I have shown two full repeats of the treadling to make this more visible.

I happen to like large scale designs and find that advancing threadings and treadlings are a very fruitful resource!

We have now established quite a repertoire of treadling elements we can use with a single tie-up: straight sequences, points, extensions and advances. By putting these together we can build an enormous variety of designs.

Here is an example. You can probably see right away that it includes a short advancing sequence of three smallish points. This sequence also appears in reverse. The change of direction is accomplished with a single extended point, creating a band of larger diamonds between two sets of interleaved diamonds. 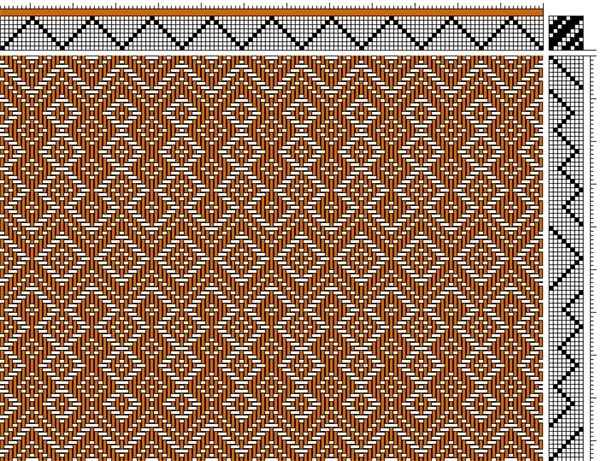 Overall I would characterise this design as quite geometric, rather like a patterned frieze from antiquity.

For a second example I have taken the first point/straight combination we considered above, but (1) made it a little smaller so it doesn’t include the whole twill progression in each motif and (2) advanced it across the twill progression to benefit from that sense of gradual movement.

Although still essentially geometric, the slow transitions give this design a more organic feel. And we haven’t changed anything but the treadling! 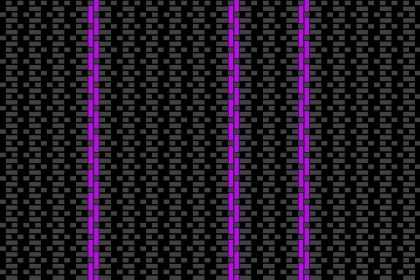 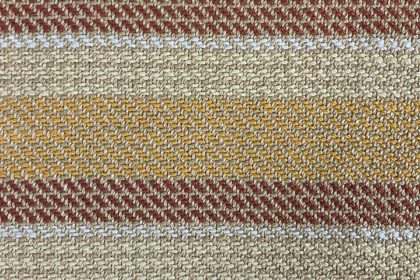 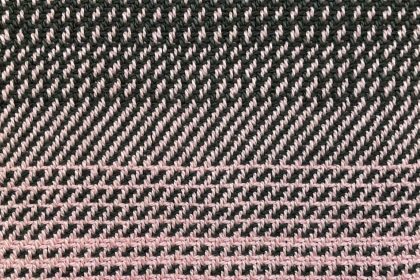 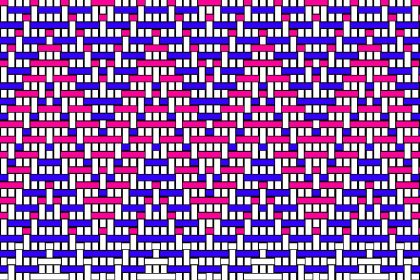 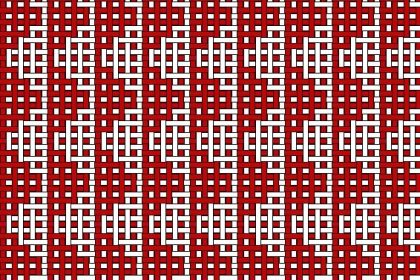 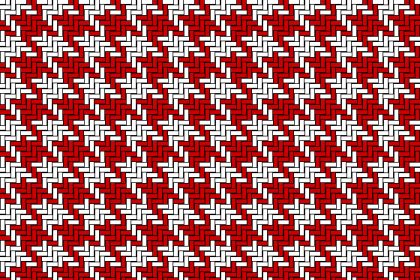 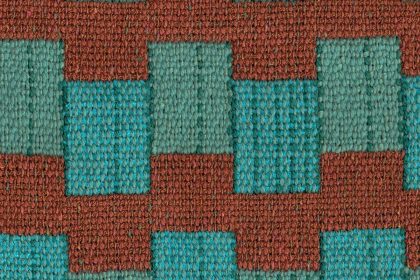 Ways to get and stay in touch with Weaving Space